“I was feeling dissatisfied with my financial position because I felt that I did not have a good overview of my position nor was my position being monitored by an expert …  Alison and her company provide me with a range of information from a very informative website to prompt face to face meetings.

I have every confidence that Alison and Lyfords will continue to meet my need for independent high financial advice, be transparent in their dealings with me, and be professional in their approach to their work, which is helping me meet my financial goals.”

We have adopted a reliable evidence based (academically proven), lower cost approach to investing. Studies such as Fama[1] & French (2010 Journal of Finance)[2] in which 3,156 US equity mutual funds were studied from 1984 to 2006 have shown that there is no evidence that trying to outguess market prices adds value. Fama’s research has shown that stock picking is too inconsistent and unpredictable to be a reasonable method of beating the share market. Over time we have become increasingly disappointed by fund managers trying to consistently deliver returns above market returns net of their fees.

There are two main camps of investing: “Passive” and “Active”.

“Passive” is where you agnostically pick the market via an Index fund. For example, a passive fund that covered the NZ share market would include all listed NZ shares in the percentages that represented their market value. Basically, in a passive fund you are buying the market. The market return is referred to as getting a “Beta return”. Buying the market is a low-cost approach.

“Active” is where fund managers use their expertise and research to select companies that are considered to be likely to outperform the average return of the share market. They might do this by analysing company accounts, company site visits etc. This is a high cost approach. Getting a return greater than a Beta return is referred to as adding value or adding “Alpha”. This used to make sense but now with the Internet a lot of this propriety information is readily available and reflected in the price of the security.

In 2012 Fama & French confirmed Fama’s earlier work on his ‘efficient market hypothesis’ which states that asset prices fully reflect all available information. A direct implication is that it is impossible to “beat the market” consistently on a risk-adjusted basis since market prices should only react to new information which is reflected in the price.

This approach has the advantages of investing “passively”; primarily diversification and low costs, as well as some of the advantages of “active” investing; namely that the index chosen can be filtered against “factors” or “dimensions”. The academic research of Fama and French identified the drivers of return. For equities these are; company size (small caps vs large cap), relative price (value vs growth), profitability (high vs low) and capital re-investment. Effectively, Smart Beta is a rules-based approach and bridges the gap between the low cost passive approach and the high cost active approach. 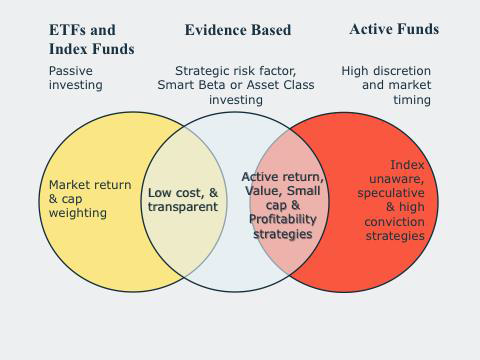 In 1998 Charles Ellis wrote, Winning the Loser’s Game, in which he presented evidence that while it is possible to generate alpha and win the game of active management, the odds of doing so are so poor it is not prudent for investors to try. The book is now in its eighth edition. In it, Ellis demonstrated and explained why it is harder than ever to produce investment results that overcome operating costs and fees. Thus, while active investing might be exciting and does provide the possibility of outperformance, the far greater likelihood is that it will lead to underperformance.

The prudent strategy is to invest in low-cost funds that invest systematically (avoiding stock selection and market timing strategies) and that target unique sources of risk (factors), and have the discipline to stay the course. That will provide you with the greatest odds of achieving your financial goals

After much due diligence Lyfords adopted a “Smart Beta approach”[3] to constructing investment portfolios. Studies have shown that active fund managers are not consistently delivering fund out-performance. Their overall fees make for a worst outcome than passive funds.

The key benefits for our clients are:

For an independent perspective, check out the videos in the section “Why Indexing Investing is Taking Off”.